Nation-Defending Machine God: Shikoutazer was a massive five hundred meter-tall mecha/armor-type Teigu used by the royal family of the Empire as a last line of defense if the Capital was ever to be destabilized. The suit itself was extremely massive and tall enough to overlook the Empire itself. It was later used by the Emperor in an attempt to stop the Revolutionary Army. During the battle, it was eventually destroyed by Tatsumi with Wave's assistance.

Shikoutazer was the very first Teigu to be built by the First Emperor and passed throughout generations to the royal family members to be used as a last line of defense if the Capital was ever to be placed under imminent threat. The First Emperor that ordered the construction of Teigus looked over Shikoutazer's development himself, and despite being the first one to be made, it was said to be the most powerful of them all. Because of its strength, it had been hidden for a very long time, only intended to be used as the Empire's last resort. For centuries, it was stored deep underground, right beneath the Emperor's palace.

At one of their assemblies, Syura alluded to this particular Teigu, whilst emphasizing its power. During the Revolutionary Army's uprising, Honest advised the Emperor to use this particular weapon against the rebels.

The existence of Shikoutazer was shrouded in mystery for centuries. Najenda herself stated that she didn't know if it actually existed.

To prevent it from being used by the Empire's enemies, Shikoutazer was designed so that it could only be wielded by those of the royal bloodline. In the anime, Shikoutazer was able to create an energy barrier to repel Akame while she was assaulting Honest.

It was heavily armored, protecting its user from nearly any attack directed towards them as well as being able to deliver devastating blows. Shikoutazer's armor was so powerful that it was able to take multiple hits from both Wave and Tatsumi, with the Emperor commenting afterward that their attacks hadn't even left a scratch. Its armor was so strong that only a newly-evolved Incursio could actually pierce through it.

However, the Supreme Teigu was shown to have a weakened chest area where it was previously damaged by Wave. Tatsumi used this weakness to finally destroy Shikoutazer.

In the manga, it was able to fire a massive ray of energy from its chest-plate, discharge mortars from its shoulder pads, launch explosive cores from a mouthpiece and multiple homing missiles from cannons across its back and lower torso.

The Teigu's core looked like an interactive cockpit which was controlled through the motions and actions of the host inside. It sported its own HUD display system to ascertain its surroundings as well as the opposition's offensive power and numbers as shown while fighting Tatsumi and Wave.

It is unknown if this Teigu had an original Trump Card. However, thanks to alchemy, Honest and Dorothea modified this Teigu to add a new Trump Card. It can be activated by Honest via his command or at his demise.

Purge Mode: When the trump card was activated, Shikoutazer shed its armor to reveal monstrous flesh while the user is corrupted by alchemic Danger Beasts and becomes violently insane. The Teigu's abilities were improved dramatically. It could control alchemic energy concentrating it around its chest cavity to create and fire a dark singularity bomb, produce small clumps from its mouth which unfurled into a horde of small, wasp-like Danger Beasts and projected a retractable, organic steel blade from its hands reaching up to incredible lengths. Other abilities it had included augmented toughness and resilience and a final armament which is the ability to fire multiple wave motion blasts from the various eyes on its body armor. 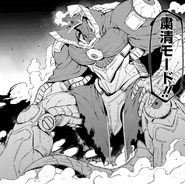 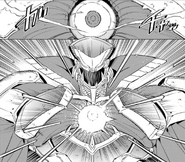 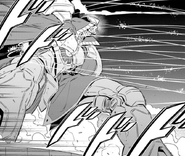