Episode 1
Roman Artillery: Pumpkin was a gun-type Teigu. It had a case with different parts in it, which could be detached and attached to modify Pumpkin. It was wielded by Mine and prior to her, it was used by Najenda. Pumpkin was destroyed due to strained overheating during Mine's battle against Budo.

Pumpkin uses spirit energy as ammunition and fires it in a concentrated shockwave. One of its main properties is that its power and range increased in proportion to the level of danger its user was in. No ammunition was needed to load Pumpkin. It was capable of rapid-fire burst shots of spirit energy and had a detachable, high-tech scouter in a compartment that fits around the user's eye. It also had a scope for sniping.

It had multiple interchangeable parts, at least seven known parts, that could be used to modify its power:

In long barrel mode, Pumpkin can be used as a lethal melee weapon, as shown when Mine was able to cut down Seryu instead of sniping due to the design that enabled it to be used as a melee weapon as well.

High Output Blast Blade (高出力ブラストブレード, Kō Shutsuryoku Burasuto Burēdo)[1]: Pumpkin's trump card was a blasting beam so overwhelming that it could act like a giant blade, cutting anything in its path, but only in long barrel mode could it be used to its maximum capabilities. This power was unleashed according to how passionate the emotions of its user were, but it overheated Pumpkin, rendering it unusable for a while. However, Mine was able to keep proper maintenance of Pumpkin, eventually enabling her to use the trump card repeatedly without overheating the Teigu. 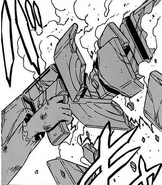