Night Raid (ナイトレイド, Naito Reidō) is one of the covert divisions of the Revolutionary Army.

Night Raid's main function is to handle reconnaissance and assassinations within the capital of the Empire. In addition, the members of Night Raid are charged with the retrieval of any Teigu discovered in order to boost the combat effectiveness of the Revolutionary Army. When not under direct orders from HQ, Night Raid opens itself as an "assassins for hire" firm to the general public. However, they do not take just any job from just anyone and will often investigate both the client and target's background in order to avoid possible deception and traps. Night Raid normally operates at night (hence the name). Their former base was located 10km from the Capital in the mountains, but they were forced to relocate to a new base that lies 15km northeast of the Capital after Team Stylish's attack in fear of being discovered.

Night Raid is composed of two groups. One works within the city (led by Najenda), while another handles the surrounding lands beyond the walls of the Capital. The division outside the Capital was completely destroyed by the Three Beasts, its only survivor being Chelsea who was soon transferred to Night Raid's Capital group. The number of members in that group, in addition to whether or not they used Teigu, are currently unknown. Although Chelsea has hinted that they had the same lively disposition as the current team which ultimately led to their downfall.

In order to oppose Night Raid, the Empire created two special units, the Jaegers and Wild Hunt, both of which have caused Night Raid considerable losses in skirmishes.

Night Raid proved to be instrumental in the downfall of the Empire, leading to the defeat/deaths of many high profile Empire officials including Budo, Esdeath, the Emperor, and Honest. Of the eight notable members of Night Raid throughout the events of the war, only four had survived: Najenda, Akame, Tatsumi and Mine. Night Raid disbanded after the war, though Najenda and Akame still worked in similar ways for the New Kingdom. Tatsumi and Mine retired from service and lived a quiet life together, settling a new life in Tatsumi's hometown. While Night Raid was known throughout the war as a rebel criminal organization, their existence was never mentioned in any of the New Kingdom's history books.

After the New Kingdom was established, Najenda remain as New Kingdom's officer while Akame traveled east where the Hinowa ga Yuku! story transpires to search for the roots of Murasame and ways to undo the curses that she and (possibly) Tatsumi suffer from.

The current members of Night Raid's Capital sub-division. With the destruction of the group responsible for activities beyond the capital walls, the following members are believed to be all that is left of Night Raid. 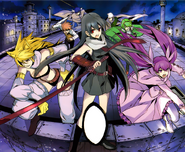 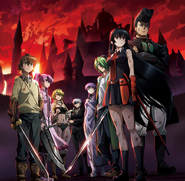