Episode 1
One-Cut Killer: Murasame was a long katana-type Teigu used by Night Raid's Akame.[1] Akame ga Kill! Zero reveals that it was formerly used by Gozuki, who personally trained Akame.[2] It was later destroyed by Esdeath during her final battle with Akame.[3] It is said that the roots of Murasame lay in Wakoku, where the events of Hinowa ga Yuku! transpire.

Murasame was a cursed blade that could kill a person with a single cut.[1] Once the sword pierces the skin, a poisonous curse spread through the victim's body,[4] killing them within seconds by stopping their heart.[5] The curse appeared as black markings that originated from the wound and spread across the victim's skin. These markings vanished once the person had died.[4] In the anime, the markings remained permanently on the victim's heart.[6] Akame stated that cleaning Murasame was very dangerous because of its ability, which is why she used gloves when wielding the blade.[7] However, this ability only worked on living, organic beings that have a heart, rendering it ineffective against Armor and Biological-type Teigu as well as machines and Yatsufusa's corpse dolls.[8][9] Esdeath showed that it is possible to survive the curse by cutting off the affected body part before it can spread to the rest of the body. However, this must be done quickly, as Esdeath even stopped time to amputate her arm.[10] The curse's black markings remain visible on the amputated body part.[11]

A flaw of the blade being if there are two or more souls inhabiting one body, only one soul can be killed at a time. Akame used this to her advantage to slay the Tyrant, liberating Tatsumi.

Murasame's trump card was a performance enhancer titled Little War Horn[12] that strengthened its user with the power of its poisonous curse.[13] When the trump card activated, the user's scleras turned black with black markings appearing around their pupils and a dark aura enveloped their body.[13] Red markings also appeared all over the user's body and remain as scars once its effect ended.[14] These scars continuously cause the user to feel pain all over their body, even after Murasame is destroyed.[15] The trump card placed considerable strain on the user's body and only lasted for a short amount of time.[16] Akame only used Murasame's trump card during her final battle with Esdeath after she freed Tatsumi from Tyrant with Murasame.[17]

In the manga, Lubbock mentioned that Akame cannot use her trump card supposedly for unknown reasons.[18] Later, Akame revealed to Tatsumi that in order to use Murasame's Trump Card, one must discard their humanity and embrace their inner demon.[19]

In the anime, the trump card is activated by cutting oneself with the sword and resisting the poisonous curse, therefore accepting responsibility for all the lives taken with the weapon.[20]

The trump card remains permanently and makes the user's body feel heavy after getting used to it. This is shown that Akame cannot pursue Yomihime for two reasons, her body is heavy and her weapons were broken. The side effect, however, can be suppressed temporarily through herbal medicine that the Elder can provide.[21] 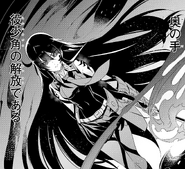