Thousand-Mile Flight: Mastema is a Teigu that takes the form of two floating discs that sprout wings that enable flight. It was used by Run and is currently owned by Wave.

Mastema's origins are unknown, but it was previously owned by the governor of the town of Joyou. Later, it came under Run's possession after he seduced her as a part of his plan of getting into the military and changing the Empire from within. After Run was reanimated as Kurome's corpse puppet, the wings turned from white to black.

After being freed from Yatsufusa's influence, Wave came to possess the Teigu and dual-wielded both Mastema and Grand Chariot for the first time.

Mastema allows its user to gain wings which give them the ability to fly for a limited amount of time; Run was shown to be able to fly at high speeds and displayed high maneuverability, as well as the ability to hover. It also enables the user to shoot feathers or launch one of the wings toward enemies, both easily capable of piercing through flesh. However, Mastema is only effective when attacking at a long distance and is at a disadvantage in close range, as shown when Run was fighting Akame.

God's Wings (神の羽根, Kami no Hane): The trump card of Mastema, which gives the wings the ability to reflect an opponent's attacks. When used, the disks split into segments and the wings turn into what appear to be an ethereal substance, which allows them to be shaped into a protective shield. This trump card can also counteract Mastema's weakness at close range. In the anime, this ability instead allowed Run to break a large stone pillar hurled at him into pieces. 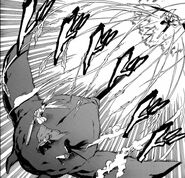 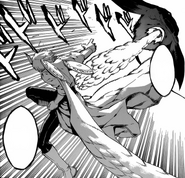 God's Wings in the anime