The Teigu is comprised of a bow and a quiver, which is used to holster arrows. The user can fire multiple arrows at once and by calling out the target's name, the projectiles, regardless of the direction they're fired, will seek the target with remarkable speed for an infinite amount of time, providing that the target stays within their range or until coming into direct contact with their intended mark. The arrows can also be stopped if their trajectory is intercepted. Esdeath stated that the weapon is nothing more than a trite, as it gives anyone the ability to appear as a competent sniper.

The weapon was previously wielded by Nuge, a member of the Revolutionary Army and was used in the rebels' fight against Esdeath when their battalion's ambush was intercepted. Ultimately, Nuge failed to defeat Esdeath as she intercepted all of his shots, which resulted in his death, leaving the weapon lying among the dying soldiers. Whether it was retrieved or left behind remains unknown. 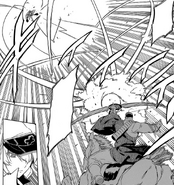 Nuge sends a barrage of projectiles towards Esdeath
Español
Community content is available under CC-BY-SA unless otherwise noted.
Advertisement