Episode 10
Carnage Incarnate: Grand Chariot is an Armor-type Teigu that is nearly identical to Incursio, although its key is a black short sword with a handguard and a chain link tassel on the hilt. When released, it takes the form of black, full-body armor with a phantasmagoric defensive film in place of Incursio's more traditional cape.

Wave states that Incursio is the prototype of Grand Chariot, meaning that it was created after Incursio.

The stance required to activate Grand Chariot is exactly the same as Incursio's, in which the user will stab the key into the ground and the Danger Beast within it will cover its wielder with armor. The Grand Chariot armor grants its user increased physical strength and speed, similar to Incursio. During Wave's fight against Lubbock, Mine and Akame, he displayed Grand Chariot's formidable capabilities. He was able to rip through a shield of thread made by Cross Tail and withstand a blast from Pumpkin, with Mine noting that the power was probably only enough to send him off-course.

Its full capabilities, however, have yet to be revealed and it is therefore unknown if it is more powerful than its predecessor, Incursio.

While the armor seemed to be completely invulnerable, it is shown that Akame's Murasame can cut through the armor if the armor is struck enough times. Also, Akame noted that the area behind the kneecaps were the weakest parts of the armor. 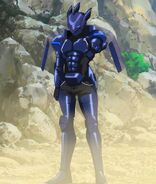