Cutter of Creation: Extase is a Teigu in the shape of a pair of large scissors with a panda bear sticker on one of its handles.

In the early phases of the revolutionary war, Extase was primarily used by Sheele. After her death at the hands of Seryu Ubiquitous, the weapon was confiscated by the Empire and later made it into Dr. Stylish's hands. During Stylish's ambush on one of Night Raid's hideouts, Extase was temporarily wielded by Team Stylish's Kaku, who was gunned down shortly after by Mine. Night Raid later reclaimed the weapon in order to preserve the honor and memory of their late friend and comrade.

Following the rebels' advancement towards the capital, one of the higher-ups noted to Honest during their summit that Extase, along with Scream and Black Marlin, was being used by revolutionaries against the Imperial Army. It was wielded by a female soldier who was sent to help out a previously raided rebel outpost, only to find the bodies of her late comrades who were slaughtered by Wild Hunt.

Extase is extremely sharp and is said to be able to cut through any material, including the armor Teigu Incursio, which was supposed to be unbreakable. However, it seems that if the material offers resistance against being cut, cutting it becomes harder, as seen in the fight between Sheele and Seryu, whose Tonfa Guns served as shields against Sheele's vicious attacks. It is also very sturdy, allowing its wielder to use it for defense; it is strong enough to even deflect bullets, as seen when Sheele used it to block attacks from Seryu's guns. The Teigu possesses great durability, enough to withstand powerful blows from Hekatonkheires.

The trump card of Extase emits a bright flash of light for a short period of time that blinds opponents without obscuring the user's vision. This ability is very useful for distraction. Although its name is unknown, Sheele called out the Teigu's name while using it. 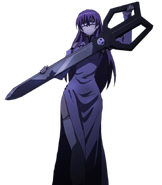 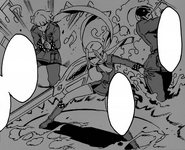 Scream, Extase and Black Marlin being used by the revolutionaries